Grisons is the largest canton and also the biggest holiday region in Switzerland. This is also where the only and Europe's oldest national park is located.

Tourism plays a major role both in summer and in winter and is the most important economic factor. Spa tourism, particularly in Vals, Scuol and Andeer, is gaining more and more importance. Worth mentioning is the sometimes high architecture: Grisons is the one canton with the highest concentration of castles and exhibits world-class cultural treasures with the Convent of St. John in Müstair (UNESCO World Heritage Site), the village of Soglio in Bergell and the church in Zillis (on the road to Splügen). The canton's languages are German, Rhaeto-Romanic and Italian.

Davos is the highest town in Europe. The world's political and business elite meet at the leading convention city of the Alps for the annual meeting of the World Economic Forum. A city in a charming chalet style, with traditional Walser culture. No wonder that the royals make this a rendezvous every year. A holiday destination, a pulsating cosmos full of opposites that attracts and complements. A sports El Dorado, spa location, business centre and cultural metropolis merge in the midst of a spectacular mountain landscape and make the highest town in Europe and the charming monastery into a destination of a thousand possibilities. In summer, a hotel guest of the destination obtains the Davos Klosters Inclusive Card from one night's accommodation, which allows them to use mountain railways and public transport free of charge. They also benefit from the guest programme Davos Klosters Active. Around 700 activities are available to choose from. From mountain bike riding technique courses to guided herb hikes, every guest finds their favourite thing to do. And the best part here is: participation is free and participation in the programmes are guaranteed from one person. 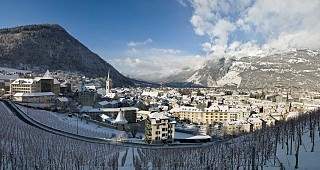 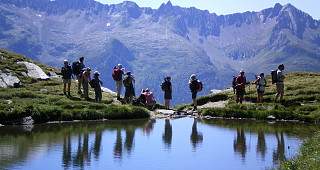 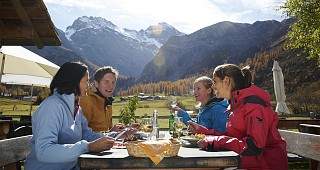 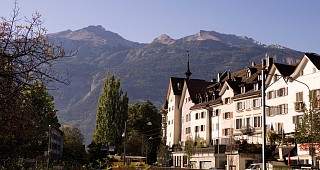 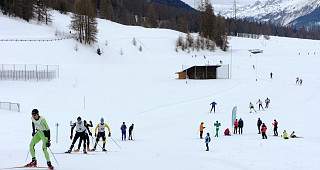 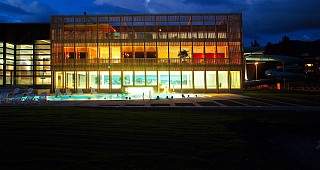 Wonderfully pine forests surround Engadine’s mountain resort and spa town, which is defined by stylish hotels from the Belle Epoque. Its village seems to have risen out of a fairy tale. Skirted by the imposing Bernina Massif, the historic mountain village (1,800 meters) casts its spell on visitors as soon as they arrive.

Pontresina, the best of high alpine pleasures: Imposing peaks and glaciers surround this idyllic resort with its picturesque alleyways, making it a favourite base for ice-climbing, ski touring and snowshoeing. Cross-country skiers also like to stop by, as the famous marathon route virtually runs through the village. In addition, Pontresina is considered a stronghold of curling in Switzerland.

For families, the ski area of San Spiert offers varied slopes and a toboggan run, while Diavolezza presents a spectacular series of challenges. Switzerland’s longest glacier descent is found in the Diavolezza/Lagalb ski area.

580 kilometers of hiking trails open the impressive mountain world up to the highest peaks in the eastern Alps, the Piz Palü and the Piz Bernina. They lead to attractive destinations such as the romantic wilderness of Val Roseg and the panoramic mountain Muottas Muragl, which offers a breathtaking view over the entire lake district. 400 kilometers of bike paths, a fixed rope park, two exciting Via Ferrata routes, a modern congress and cultural center and a lively new adventure pool complement the variety of scenic impressions.

The neighboring village of St. Moritz is by no means in its shadow: Celerina delights visitors with its charm, a variety of offerings and plenty of sunshine. San Gian, a church dating back to the 14th century, is perched just outside Celerina. It is the symbol of the village.

The family-friendly ski area of Corviglia/Piz Nair is located above Celerina. Nearby, on Muottas Muragl, sledding and winterhiking rule the day. Cross-country skiers explore the Upper Engadine’s extensive network of trails starting from Celerina. Ice sport fans pursue their skating or curling hobby on Europe’s sunniest rink. If you are looking for an adrenaline rush, you will find it in a taxi bob on the famous Olympic Bob Run.

The mountain trains at Celerina leading high up offer breathtaking views. Connoisseurs of fine cuisine will find the resort town’s only mountain restaurant on Muottas Muragl, which in the evening invites you to enjoy “Mountain Dining“ and in daytime offers hikers challenging paths with panoramic views of Upper Engadines lakes.

Mountainbikers find demanding trails on Corviglia/Marguns, and families with children enjoy themselves on the large playground at the Marguns Mountain Station.

Flims is a popular Graubünden destination for families, bikers and hikers, and is considered one of the most varied holiday regions. It has plenty of hiking trails, mountain bike routes and bathing lakes for adventure and relaxation.

The ski resort of LAAX is easy to reach from Flims. 29 facilities and more than 235 km of pistes offer everything that beginners, freestylers and skiing enthusiasts could wish for. Voted Switzerland's best skiing area on several occasions, LAAX is Europe's leading freestyle resort, with guaranteed snow and a special highlight in the shape of the world's biggest halfpipe.

Whether you're looking for action on Europe's longest flow country trail or relaxation by Lake Cauma, you're sure to find it here. Mountain bike routes, hiking and themed walking trails, the «Pinut» via ferrata, the high-rope course and golf make for holidays full of variety for the whole family. A special highlight is river rafting in the «Swiss Grand Canyon».